Frequencies are public property in accordance with the mandate of Act No. 32 of 2002 on broadcasting that it contains the principles of broadcasting is based on the diversity of content and diversity of ownership. Television broadcast network is a realization of the principle of the commitment of 10% local content and legal entities owned by the television network members. Empirical facts network broadcasting system failure with the dominance of the content of the center and centralization at the central network. The purpose of this study was to determine the factors that affect KPID Bali at the implementation of private television broadcasting network in Bali and find out how the implementation of policies of private television broadcasting network in Bali. The study used descriptive qualitative approach. Data collection through interviews with informants purposively, and observation. Processing and analysis of data using triangulation using the model of implementation of the public policy of George Edward III. The results of this study indicate that only reached 6-7% local content and the presence of a legal entity for a network not directly make network has full authority. Implementation of a networked private television broadcasting policy is ineffective because communication is by cases, budget constraints, lack of commitment to carry local broadcast in a networked broadcast system in Bali as well as the high costs required for setting up local broadcasts. Member of network does not have full authority although it has had its own legal entity because it is still dominated by the network in the center. Punishment has not been able to ensure a deterrent effect because the authority KPID Bali only limited administrative sanctions for those who violate the regulation. Anugrah KPID Award rewards in the form can not be implemented on a regular basis because of the SOP licensing and supervision of broadcast content in accordance with regulation KPID Bali. Fragmentation in the implementation of networks broadcasting in Bali involving the Communication and Information Ministry and the Provincial Government of Bali. Television programs run on economical reasons not usefulness to the public under the existing regulations.

This journal provides immediate open access to its content on the principle that making research freely available to the public supports a greater global exchange of knowledge.

All articles published Open Access will be immediately and permanently free for everyone to read and download.  We are continuously working with our author communities to select the best choice of license options, currently being defined for this journal as follows: Creative Commons Attribution-ShareAlike (CC BY-SA) 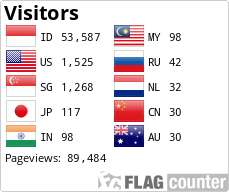